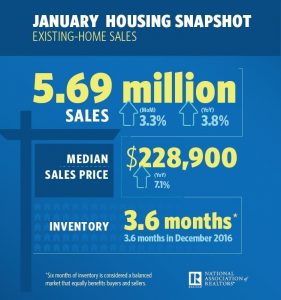 sales, which are completed transactions that include single-family homes, townhomes, condominiums and co-ops, rose 3.3% to a seasonally adjusted annual rate of 5.69 million in January from an upwardly revised 5.51 million in December 2016. January’s sales pace is 3.8% higher than a year ago (5.48 million) and surpasses November 2016 (5.60 million) as the strongest since February 2007 (5.79 million).

“Much of the country saw robust sales activity last month as strong hiring and improved consumer confidence at the end of last year appear to have sparked considerable interest in buying a home,” said Lawrence Yun, NAR chief economist. “Market challenges remain, but the housing market is off to a prosperous start as home buyers staved off inventory levels that are far from adequate and deteriorating affordability conditions.”

Total housing inventory at the end of January rose 2.4% to 1.69 million existing homes available for sale, but is still 7.1% lower than a year ago (1.82 million) and has fallen year-over-year for 20 straight months. Unsold inventory is at a 3.6-month supply at the current sales pace (unchanged from December 2016).

“Competition is likely to heat up even more heading into the spring for house hunters looking for homes in the lower- and mid-market price range,” added Yun. “NAR and realtor.com’s new ongoing research – the Realtors® Affordability Distribution Curve and Score – revealed that the combination of higher rates and prices led to households in over half of all states last month being able to afford less of all active inventory on the market based on their income.”

“Supply and demand imbalances continue to be burdensome in many markets, and now Fannie Mae is supporting a Wall Street firm’s investment in single-family rentals,” said NAR President William E. Brown, a Realtor from Alamo, California. “This will only further hamper tight supply and put major investors in direct competition with traditional buyers. Instead, the GSEs should lower overly burdensome fees and help qualified borrowers become homeowners.”

First-time buyers accounted for 33% of sales in January, up from 32% in December and a year ago. NAR’s 2016 Profile of Home Buyers and Sellers – released in late 2016 – revealed that the annual share of first-time buyers was 35%.

All-cash sales were 23% of transactions in January, up from 21% in December but down from 26% a year earlier. Individual investors, who account for many cash sales, purchased 15% of homes in January, unchanged from December and down from 17% a year ago. 59% of investors paid in cash in January.