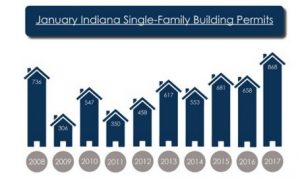 a Builders Association says single-family building permits rose 32 percent in January. The organization says 868 permits were issued throughout the state, up from 658 during the same month the previous year. The IBA says permits increased 12 percent in January over the previous month, according to the latest data from the U.S. Census Bureau and the Department of Housing and Urban Development.

IBA President Lance Swank expects permits to continue to increase at a gradual, but consistent pace in 2017.

“The housing market remains strong after a solid finish in 2016 that was spurred by employment gains and a rise in household formations,” said Swank. “Regulatory burdens remain a major challenge to our industry and many builders still face shortages of lots and labor. Building material price increases will also be a rising concern this year, but despite these constraints, the overall housing market fundamentals remain strong and we expect to see continued growth.”

The IBA says the National Association of Home Builders/Wells Fargo Housing Market Index fell two points to 65 in February. Any number over 50 means more builders view sales conditions as good rather than poor.