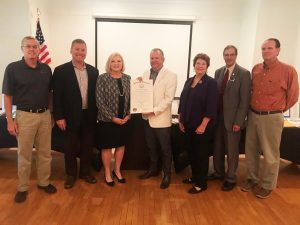 Anderson- State Representative Terri Austin, (D-Anderson), presented a proclamation from the Indiana General Assembly to local association president Paul Schwinghammer.  Austin read the proclamation at the September 28th general membership meeting. “The home building industry has a significant economic impact on the Indiana and Madison County economies including more than $208 million in income from Indiana resident, $38 million in taxes and other revenue for the state and local governments, and 3,197 jobs for every 1,000 single-family home constructed.”  Austin also spoke on the Indiana Department of Workforce Development’s initiative to bolster training and education through employer grants and tuition support.

Rick Wajda, the Indiana Builders Association executive officer, was also present at the meeting and reported on IBA’s continuing effort to recruit young adults into the construction industry. “All too often kids are coming out of college with a degree that just doesn’t get them a very high paying job, yet they may have $120,000 in student loan debt.  Our goal is to educate kids in the secondary schools, as well as their parents, as to the benefits and security a construction related career can bring,” he said.  “Indiana, like most other states, is suffering from a large labor shortage in the housing and commercial construction industry which has increased since the housing crisis ended in 2012,” he added.

The Madison County chapter was formed September 23, 1952 and is the sixth oldest builders association in the state.